Sheet of paper, watermarked with a seated Britannia in a cartouche under a crown, with the letters ‘GR’ under a separate crown on the other leaf, originally folded in half. On one half of one side, a plan of rooms, one with a bay window. No indication of which house it relates to, but probably Hampton. 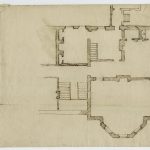