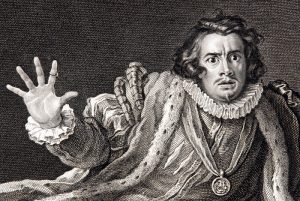 Garrick had been entranced by the theatre from an early age. As a youngster in Lichfield he had been involved with theatrical performances staged in the home of Gilbert Walmsley in the Cathedral Close.

When Garrick went to London in 1737 he worked with his elder brother Peter in his wine-importing business in the Strand. He visited the theatre as often as he could and began to write and to harbour ambitions of acting himself. In the summer of 1741 he appeared on the stage in Ipswich, under the pseudonym ‘Mr Lydall’. He still used this name in the autumn when he appeared as Richard III at Goodman’s Fields, London, but by 23 November he was appearing under his own name and the wine trade was abandoned for good.

In 1742, 1745 and 1746 he went for the summer season to the Smock Alley Theatre in Dublin. During the winter seasons 1742-45 he acted at Drury Lane and in 1746-7 at Covent Garden. In 1747 he returned to Drury Lane as co-manager with James Lacy. The remainder of his career was spent as actor-manager at Drury Lane; he had a farewell season in 1775-6 and then sold his shares in the theatre.

He was as successful in comedy roles as in tragedy, a fact recorded in the portrait ‘ Garrick between Comedy and Tragedy’ painted by Reynolds. He is credited with bringing a new naturalism to his acting and a show of emotion that was in keeping with the rise of the Age of Sentiment. The Collection has his acting copy of George Villiers’ The Rehearsal.