A list of pictures sold for David Garrick by George Good, London

Large sheet of paper, watermarked with an elaborate figure of Britannia and a lion wielding a sword, with the words ‘PRO PATRIA’, also the initials ‘JW’. The paper was originally folded in half to form four pages, and written on pages one and two; then folded over in three, and annotated on outside. One of the folded sections on the unwritten portion has been torn off. A list of pictures sold for David Garrick by George Good, London, on 6 March 1772. 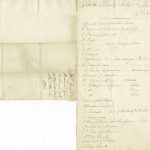 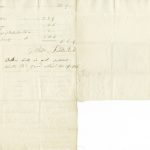