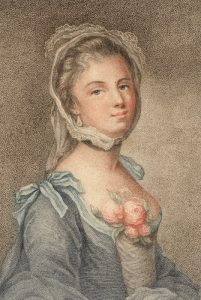 Eva Maria Veigel was born in Vienna on 29 February 1724. She was a dancer, styling herself 'La Violette', and regularly appeared before royalty in Austria and France. She made her debut in England at the King's Opera House in the Haymarket in 1746, dancing before the king & queen. David Garrick was also in the audience and was immediately smitten. She caused a sensation by wearing a pair of black velvet breeches under her skirt 'but finding they were unusual in England she changed them next time for a pair of white drawers'. She became a favourite and protégée of Lord and Lady Burlington. She later transferred to the Drury Lane Theatre, although she never worked with Garrick.

She and Garrick were married on 22 June 1749 in both Anglican and Catholic services, as she was a Roman Catholic. (There is a note in her diary for 3 July 1779 when she signed the oath of allegiance, following the first Catholic Relief Act). They had no children but an apparently happy marriage. David Garrick is reported to have said that he never passed a night apart from her after their marriage. Although she gave up dancing after she married, she remained graceful and charmed everyone who met her. At the Stratford Jubilee in 1769, her grace in dancing a minuet aroused comment. One guest thought the ball on the first night, 'remarkable chiefly for the most elegant minuet I ever shall see danced by Mrs. G - and Mr-'.

Four of her diaries survive, those for 1768, 1769 and 1819 in the Folger Shakespeare Library in Washington, DC, and that for 1775-6 at Hereford Museum. This contains the poignant and tear-stained entry of David Garrick's death. Her 43 years of widowhood were spent between her homes in London and Hampton, still seeing friends and taking an interest in the theatre. The 1819 diary was written when she was 96. She was still going regularly to church, visiting friends and taking her box at the Drury Lane Theatre. She died on 16 October 1822 and was buried in Westminster Abbey near her husband. It is through her estate that the Garrick papers came to be at Hereford Museum.