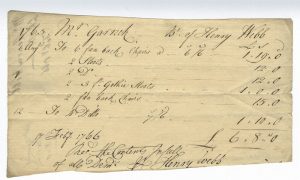 The Garricks were a wealthy and cultured couple, and the furnishing of their homes reflected this. In 1770 Mrs Delaney wrote of the Hampton villa, ‘The house is singular, and seems to owe its prettiness and elegance to her [Mrs Garrick] good taste. It has the air of belonging to a genius.’

Under the terms of Garrick’s will, both houses and all the pictures, household goods and furniture were put in trust for the use of Mrs Garrick during her lifetime. After her death the statue of Shakespeare by Roubillac and his collection of old English plays were to go to the British Museum. The household linen, silver, plate and china, along with carriages and horses and the stock in the cellars, were left outright to his wife. The Hereford collection contains many inventories of both houses taken after her death in 1822, along with receipts for purchases through the years.

There is a receipt for chairs and stools bought from Henry Webb in 1766. Other sources say that Garrick bought furniture from Thomas Chippendale but was so slow to pay that Chippendale had to sue him. Three of these pieces, in the popular Chinoiserie style are in the V&A. This style is also reflected in a set of bed hangings made for the Garricks in the 1770s. In 1771-2 they were buying items for their new house at the Adelphi, such as the set of coffee cups and mugs bought from Josiah Wedgwood. In 1787 Mrs Garrick made an inventory of all her plate, including such items as a tea urn and chocolate pots. A printed catalogue was produced for the sale of all her china, plate, jewellery in 1823.

The garden at Hampton, with its small dock on the Thames, was a source of pleasure to both of them. Apart from the delights of the Temple of Shakespeare, Garrick enjoyed boating, fishing and bowling. Mrs Garrick bought new garden furniture in 1782. In 1762 Johan Zoffany had painted a picture of the Garricks and friends seated on the lawn beside the river, with George Garrick fishing.