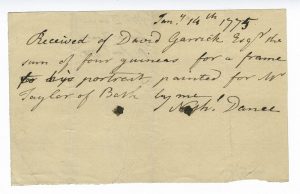 As Garrick’s career flourished, so his wealth increased and he was able to indulge his tastes for collecting books and objets d’art. The Hereford Collection contains a great deal of information about these collections.

Perhaps the first things he began to collect were copies of English plays. These included not only many imprints of Shakespeare’s plays, but also those of well-known Restoration playwrights and a number of more obscure early and contemporary texts. Garrick left his collection of some 1,300 printed volumes to the British Museum in his will. They were received by the British Museum in 1822, after the death of Mrs Garrick. The British Library still holds this collection as well as a contemporary manuscript catalogue. He also collected manuscripts of early plays, such as the autograph manuscript of Henry Massinger’s play ‘Believe as you list’ (1631), which was found amongst ‘a mass of rubbish’ by Samuel Beltz, brother of George Beltz who was one of the executors of Mrs Garrick’s will. He also collected autograph material relating to William Shakespeare, such as the 1613 deed of mortgage signed by Shakespeare, which he acquired in 1768. The Hereford Collection has a number of unused bookplates from Garrick’s library and a set of notes on his extensive library written after Mrs Garrick’s death.

Like many wealthy and educated men of the time, David Garrick took advantage of his travels on the continent to purchase items of interest. The Garricks visited Paris in 1751 and again in 1763, when they embarked on a two-year long Grand Tour. This saw them visit Paris, Turin, Milan, Florence, Rome, Naples (staying for three months), Venice, and Munich. The Hereford Collection contains accounts for their journey in Italy in 1764. Other items range from lists of books bought in Venice to what appears to be a laundry list written when they were in Italy. He probably acquired a number of his seals and cameos on this journey; others, including seals of the head of Shakespeare and other notables were probably bought in England. Many such seals, cameos and decorative snuff boxes are listed in the inventories taken after his wife’s death.

He bought paintings throughout his life, of himself (see Portraits) and of many other subjects. . He sold part of his collection in 1772, but it is clear that he continued buying; see for example the receipt from Nathaniel Dance for a frame for a picture painted by Dance in 1775 and the receipt for paintings bought from Benjamin Van der Gutch in 1777. There is an inventory of drawings & prints which belonged to David Garrick at the time of his death. As well as paintings, the Garricks collected reproductions, and an inventory of prints was made after Mrs Garrick’s death. An inventory of ‘pictures’, (i.e. paintings) in the ‘town house’ (i.e. 5 Adelphi Terrace) and Hampton House were made at the same time.

Among David Garrick’s most treasured possessions was the box carved from wood of the mulberry tree believed to have been planted by Shakespeare.at New Place, Stratford. This ornately carved box had been presented to him by the burgesses of Stratford at the time of the Shakespeare Jubilee in 1769. He had also bought a store of the wood and after the deaths of the Garricks this wood, and some from a cypress tree planted by them at Hampton, was used to make small keepsakes (snuff boxes and needlework boxes etc.) for family and friends. Unfortunately, not everyone was happy with the settling of his estate. After Mrs Garrick’s death, bickering between her niece Madame de Saar and nieces and nephews on the Garrick side led to a law suit.